The Myth of the Salmon of Knowledge 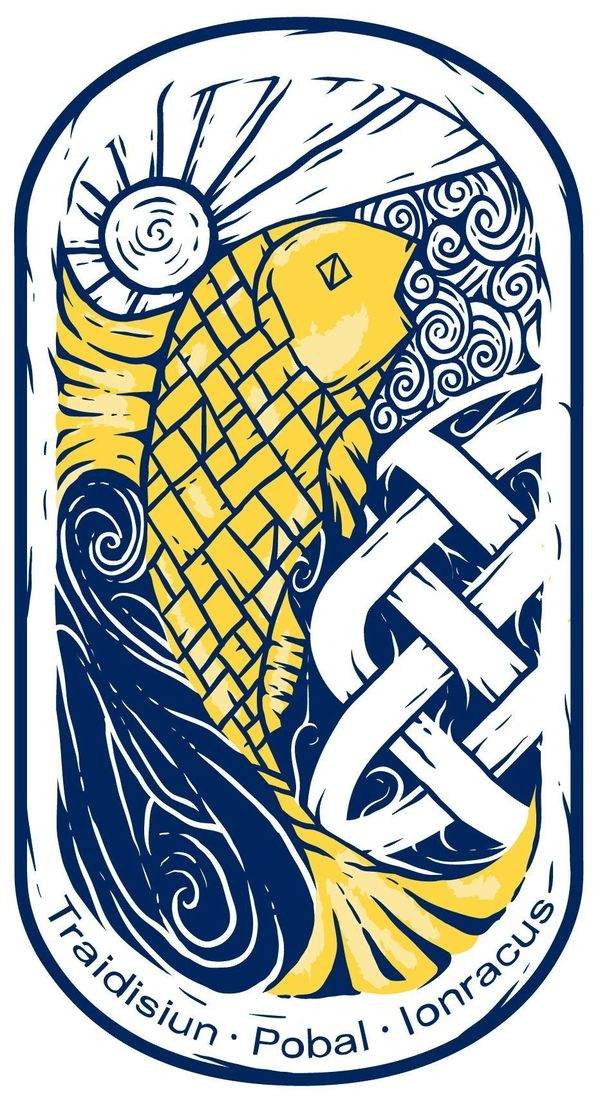 A Symbol for Wisdom

The Salmon of Knowledge is the wisdom figure of Irish mythology. There are many versions of the classic tale, but in each a brave leader (Fionn) goes in search of wisdom in order to better serve his people (the Fianna). At the University of Notre Dame, our graduate students come seeking wisdom and knowledge, then go forth using those gifts for the benefit of people all over the world. The Salmon of Knowledge, therefore, is the perfect symbol of the common life journey shared by the diverse members of our graduate community.

Along the bottom frame are the Irish words traidisiun, pobal, and ionracus, which translate as tradition, community, and integrity. Graduate students at Notre Dame are welcomed into a vibrant and diverse community of scholars. They are immersed in an educational environment that encourages the integration of knowledge, experience, values, and action. And as members of the Notre Dame family, they participate in and contribute to the rich traditions of the university.

Fionn MacCumhail was just a lad when he was sent from his home to the poet and great master, Fineagas, for education in many subjects - above all, on how to become a true heroic warrior. The old fellow had been living alone for many years in a little house he built himself beside the River Boyne and he enjoyed Fionn's company.

Fineagas kept a very close eye on the Boyne, day and night, hoping to spot the unique fish 'Bradan an Eòlais - The Salmon of Knowledge'. Apparently, the first person ever to taste this fish would become the wisest in all Ireland. Everyone who had so far tried to catch it had been disappointed, and Fineagas dearly hoped that where others had failed he would be successful.

One day Fineagas and Fionn were sitting on the river bank enjoying a stimulating lesson when the tutor noticed a glorious big salmon swimming towards them. 'This surely is the Salmon of Knowledge!' he cried and rushed to get a net - a fine strong one, to haul it in. He knew also that he mustn’t look into the fish’s eyes or he would fall fast asleep, and he was careful not to do this as he struggled to net the beast of a fish. And then, without warning, the salmon leapt out of the water in his direction. The old man panicked and looked straight into the eyes of the fish, and immediately fell into a deep sleep.

Fortunately, young Fionn saw this and shook Fineagas awake. The old teacher commanded Fionn to tear his dark-coloured shirt and tie it round Fineagas' eyes so that he could no longer see the fish. Fionn obeyed, and a blind-folded Fineagas and a tenacious salmon quarrelled and fought for the rest of that afternoon until the fish eventually gave up the struggle. Fineagas had caught Bradan an Eòlais. He would be the wisest person in all of Ireland.

As you’ll understand, this great effort had exhausted poor Fineagas and he asked Fionn to cook the fish while he had a recuperative snooze. Fionn promised not to taste the salmon.

The monster fish was placed on a spit above a peat fire and it wasn’t long until it was ready for eating. Fionn called Fineagas to come and taste it, but as he did so a small drop of burning fish-oil splashed up onto his thumb. Fionn simply stuck his thumb in his mouth to quell the pain.

When Fineagas arrived he immediately noticed that Fionn MacCumhail looked different. He could see from the gleam in his eyes and the glow from his cheeks that something had happened to him.

'Did you have any of the fish flesh?' Fineagas demanded. Fionn had to tell the truth.

'Did you try any of it at all?' Fineagas asked. Fionn then remembered that he had put his thumb in his mouth when the oil burned it, and he told Fineagas this.

Fineagas understood there and then that the special knowledge which came only from that cooked salmon on the spit had been granted to Fionn and not him. Despite his loss, Fineagas was happy for the lad, since he knew that he would grow up to be a most wise man and a great hero and that, from that day forth, Fionn MacCumhail would be the ablest and most celebrated leader of the Fianna warriors.

This text appears in its entirety on the Education Scotland website (no longer available). No changes have been made.